The Society's president, David M. Cvet was visited Slovenia between October 7 - 21, visiting family & friends, participated in a historical fencing workshop, and delivered a presentation on Canadian and Slovenian heraldry in Ljubljana, the evening of October 14th. The lecture was 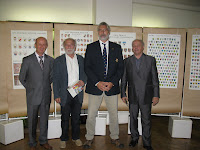 organized by the Slovensko rodoslovno društvo (Slovenian Genealogy Society) and held at the Svetovni slovenski kongres (Slovenian World Congress Centre) on Cankarjeva Ulica in Ljubljana. The evening began with a heraldry display, comprised of depictions of municipal arms (click on image above to view larger of the same - L-R: dr. Vladimir Žumer, Peter Hawlina (President of Slovensko rodoslovno društvo and organizer of the presentation, David, Mr. Sergij Pelhan, former Minister for Culture and past-Mayor of Gorica, presently President of Slovenian Emigrants Association - a host of the exhibition), and a colourful display on the specifics of the design and tinctures of the Slovenian national flag. The display included details on the procedure for petitioning arms to the Canadian Heraldic Authority, details provided by David including sample images of his personal Letters Patent. A number of important people gave a short talk on the state of heraldy in Slovenia, including dr. Vladimir Žumer, former Head of State Archive of Slovenia, now President of the newly formed Komisija za presojo javnih simbolov, grbov, zastav, pečatov, žigov in štampiljk (Commission for Public Symbol, Coat of Arms, Flag, Seal and Stamp Judgment) which exists within the department of the State Archives. 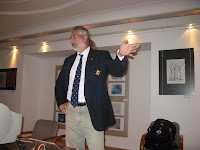 David's presentation after this display followed dr. Angelika Hribar's lecture on Slovenian genealogy along with her new book on the subject. David's presentation was a brief introduction to Canadian heraldry, describing the role of the Society in Canadian heraldry, and the role of the Canadian Heraldic Authority. The presentation included an overview of how one petitions for arms in Canada, and how this process is handled in the College of Arms. Further details were offered on the procedure for registration of arms in the USA. The presentation concluded with some details on the developments of heraldry in Slovenia, and the need to standardize on the 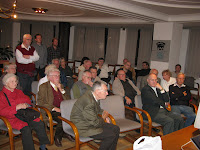 It is evident that the interest and activities in the resurrection and practice of Slovenian heraldry is on the rise, and the country has taken steps to implement some structure in the practice of heraldry, with the first step of the creation of a new Commission to review all municipal arms (click on the image of the municipal arms on the left to view a larger image of the same), and have them conform to heraldic rules. The Commission will in the future, expand to include the registration of personal arms in the future. The Commission along with private individual's working towards the promotion and education of Slovenian heraldry through websites such as Slovenska heraldika will hopefully, raise the level of the practice of heraldry to a similar level as other heraldic nations.

I would like to say: "Thank You, David!" in the name of the Commission.

We all hope to see you again next year and to cooperate with the Royal Heraldry Society of Canada. I also hope to visit Canada as soon as possible and to meet the Society in person.