Contemplating this issue's message, I pondered on what might be considered significant anniversaries for 2009. I was unsuccessful in discovering any specifically heraldic anniversaries, but did recall some which, while not entirely heraldic, were significant from a human perspective and in demonstrating how symbolism plays an important part in our lives. 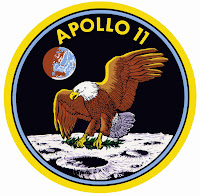 As a great admirer since my childhood of NASA and its programs, I have a great interest in the first one. This year will mark 40 years since the first lunar landing by Apollo 11 on July 24, 1969. Each NASA mission is identified by a special “crest” (their term) symbolizing its various concepts and attributes – in the case of the Apollo 11, the “crest” shows the American eagle landing on the surface of the moon with the olive branch of peace clenched in its talons. I remember it as one of the rare times when the entire planet was in sync with a significant human accomplishment. Continuing with the space exploration theme, a worthy acknowledgement is this year marks the 20th anniversary of the formation of the Canadian Space Agency or CSA. Interestingly, unlike NASA, the CSA had petitioned for a grant of arms which were granted by the Canadian Heraldic Authority on July 25, 1991. The arms are depicted below right. 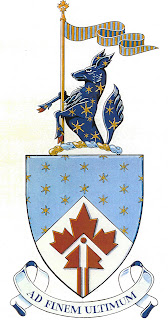 For the Scots out there (and for the rest of us who wish we were), this year marks 250 years since the birth of Robbie Burns.

From a monarchical perspective, this coming April marks the 500th anniversary of Henry VIII ascending the throne of England.

Another significant event was the dismantling of the Berlin Wall on November 9 of 1989, with 2009 marking 20 years since that historic event took place.

2009 marks the 43rd anniversary of the Society since its creation in 1966. Perhaps “43rd” doesn't have the same ring as “40th ” or “50th ” as an anniversary, but it does clearly indicate the long history and the viability of the Society, especially in surviving the dramatic cultural and political changes that have occurred during the years since its birth. I am pleased and honoured to be President of such a longstanding, credible and viable organization.
Our journal Heraldry in Canada also marks its 43rd anniversary, having been published first in September of 1966. Its first issue consisted of two double-sided 8½ x 11 sheets and contained five black-and-white illustrations of Provincial Arms, a list of thirty-two Society members and four or five articles. The editor was probably our Society’s founder, Allan Beddoe, O.B.E. Another significant anniversary for 2009 is the 19th for our newsletter Gonfanon, first produced in December 1990, with editor Daniel Cogné and associate editor John Kennedy. (Thanks to John Wilkes for providing these historical details).

On the subject of the Society’s traditions, it should be noted that a new one was established at the recent AGM in Montreal. This was the bearing in of the mace by Nemo Turner, our very own mace-bearer. I was surprised to learn of the extensive history and significance of this ceremony, and am pleased that Nemo has volunteered to fill this new position. I felt that the ceremony of the mace enhanced the “feel” of the AGM and look forward to the ceremony again at future meetings of the Society. Speaking of AGM’s, mark on your calendars:- October 2-4, 2009 at the Toronto Arts & Letters Club as the next AGM.

I was pleased to learn that the BC/Yukon Branch had put on a successful and well-attended formal dinner at the Oceanfront Grand Resort, Victoria, having as special guests the Hon. Steven L. Point, OBC, Lieutenant Governor of British Columbia and his wife, the Hon. Mrs Gwendolyn Point.
In December the Toronto Branch held their fifth annual Christmas Dinner at the Royal Canadian Military Institute, having as its special guest heraldic artist Karen Bailey. She delivered a fascinating account of her experiences as a Canadian Army artist in Kandahar, leaving her with unforgettable images to put onto canvas. Her artwork will be put on display at a planned exhibition this year or in 2010. Dr. Claire Boudreau, Chief Herald of Canada also attended the dinner, which was a thoroughly enjoyable affair. These local events are extremely important to ensure that the Society remains relevant by enhancing its ability to “reach out” to members and non-members alike.

In closing, I look forward to the events scheduled for 2009 and to the creativity that goes behind the planning and organizing of these occasions. I look forward also to working with the Executive and facing the numerous challenges ahead, and to finding new, creative and pragmatic solutions that will further the mission of the Society.

Posted by About the RHSC at 8:52 AM No comments: