The "Queen's Beasts" will "attend" the RHSC AGM 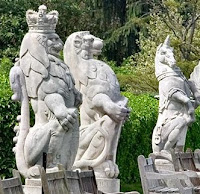 The RHSC's Annual Conference will be held in Ottawa from 01-03 October 2010. Accommodations and the Annual Meeting will be at the Delta Hotel on Queen Street. The Saturday evening formal dinner will be at the Canadian Museum of Civilization in Gatineau, Quebec (across from Parliament Hill) where the speaker will talk on "The Queen's Beasts." These heraldic treasures were created to be used at HM Queen Elizabeth II's coronation in 1953, and stood in the Annexe at Westminster Abbey that day. They came to Canada in 1959, and have been at the Museum since then. Rarely seen by the public, some of the Beasts will be on display at the dinner.
Posted by About the RHSC at 6:18 AM 1 comment: