On Monday, June 22, David M. Cvet, President of the Royal Heraldry Society of Canada delivered a presentation on Canadian Heraldry to an audience comprised of three classes of grade 4 and grade 5 students, of the Digby Elementary School in Digby, Nova Scotia.

The presentation began with the viewing the first part of the Society's DVD which introduced the viewers to the basics and history of heraldry.

After the DVD, David fielded questions from the students, and then distributed photocopies of blank shields for the kids to colour their own coats of arms and participate in a contest on deciding whose drawing of the arms were considered the best or most interesting. 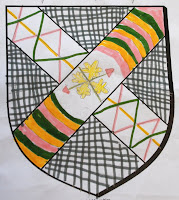 There were six tables occupied by students, and once the drawing was completed, each table selected the best or most interesting arms. These were collected by David, and then shown to the entire group of students. The selected arms were determined by the volume of the cheers and applauding by the students. As it would happen, there was a tie between two drawings, and in order to break the tie, a coin toss was done, and Hannah's arms was selected. Her depiction is shown on the left. She was presented with a prize of a DVD entitled "Kingdom of Heaven". The Society challenges those "heraldically" inclined individuals to attempt write the blazon of the arms!

The Society wishes to thank Mr. Martin Winchester, grade 5 teacher at the school for organizing this event.