Prince William and Catherine Middleton were married on Friday, April 29, 2011 at Westminster Abbey. Their ceremony was highlighted with the usual pomp and circumstance efficiency of the Royal Family. Later, the royals visited Canada on a 9-day tour from the east coast to the west, and then flying to California departing from Calgary. The couple were gracious and approachable through out their tour, clearly indicating that they were enjoying themselves and enjoying Canada. By all accounts, the tour was, as Prime Minister Stephen Harper put it, a "tremendous success".

The Society's President, David M. Cvet FRHSC (Hon), wrote a letter to HRH Prince William, Clarence House on April 29, 2011 congratulating the couple on behalf of the Royal Heraldry Society of Canada. The letter also informed HRH that the Society has had some history with the Royal Family, with the proclamation from Her Majesty on March 20, 2003 of the name change from the Heraldry Society of Canada to the Royal Heraldry Society of Canada. The President was pleased to receive a response from the Duke and Duchess of Cambridge via Buckingham Palace in the form of a card with a photograph of the Royal Couple on one side, and a thank you note on its reverse side. The Society looks forward to the various celebrations and projects which will come to fruition in the Diamond Jubilee in 2012.

Posted by About the RHSC at 7:45 AM No comments: 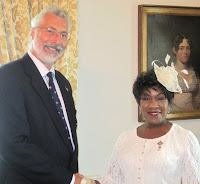 As weather would have it, it was pouring rain that day, and the party event was moved indoors. This is the second year that David had the opportunity to be in the Halifax area, and therefore took the opportunity to attend this event. The same day also provided the opportunity to meet with the Atlantic Branch President, Mr. David Hovey, who treated David to lunch at the prestigious Halifax Club, located near the Government House.
Posted by About the RHSC at 5:14 AM 2 comments:

Earlier this year, the President, on behalf of the Society, sent a letter to the Chief Justice of Canada inviting her to consider the role as Vice Patron to our Society. In a letter received in late February, Madame McLachlin graciously accepted the invitation. Given that the Society had already scheduled a Board meeting on May 28th in Ottawa, the thought was to invite her and her husband, Mr. Frank McArdle as our guests at the formal dinner, planned on the evening of that day at the Rideau Club in Ottawa. Further correspondence with Madame McLachlin conveyed to us that she'd be happy to attend the dinner along with her husband. Adjustments were made to the arrangements of the dinner, organized by the Ottawa Valley Branch President, Mr. Blair K. Churchill, which in the end, was well received and was felt by all attending, an outstanding success. Towards the end of the evening, Madame McLachlin indicated that when the invitation for the Vice Patron arrived, she was "curious" about heraldry and the Society, at the end of the evening, she was definitely interested in heraldry and Society.

The guests at the dinner were treated to an informative and entertaining presentation by the Sagueny Herald, Dr. Forest Pass. This was followed with a proclamation of the Letters Patent by the Deputy Chief Herald, Bruce Patterson (in French) and Assiniboine Herald, Mr. Darrel Kennedy (in English). The proclamation was the first that Madame McLachlin had experienced, and thought it was a wonderful manner to present an individual's arms to the people.

Madame McLachlin is Canada's first woman to hold the position of Chief Justice of Canada. The Society looks forward to her future involvement with the Society. We are filled with gratitude and honour that she had accepted our invitation.
Posted by About the RHSC at 10:51 AM No comments:

Mr. David M. Cvet, FRHSC (Hon), President of the Royal Heraldry Society of Canada was invited to join His Excellency the Right Honourable David Johnston, Governor General of Canada, accompanied by the Right Honourable Stephen Harper, Prime Minister of Canada for a special announcement and unveiling of the special emblem and commemorative medal to mark the 60th anniversary of Her Majesty's accession to the throne in 1952, which will be celebrated next year in 2012 in Canada at Rideau Hall, Thursday afternoon, February 3, 2011. The medal will serve to honour significant contributions and achievements by Canadians.

The Chancellery of Honours, as part of the Office of the Secretary to the Governor General, will administer the Queen Elizabeth II Diamond Jubilee program. The inaugural presentation ceremony of the Diamond Jubilee Medal will take place in 2012. Further details of the program will be announced in due course. At this time, the number of medals to be struck is still being determined.

The central component of the Official Canadian Diamond Jubilee Medal is the Royal Cypher - The Queen's monogram (EIIR - Elizabeth II Regina) below St. Edward's Crown. Beneath the Royal Cipher, a red maple leaf is positioned on one stem and placed on a diamond. The numeral "60" is to denote the Diamond Jubilee of Her Majesty's reign as Queen of Canada. Rising up on either side in a wreath formation are a series of maple leaves in graduated tones - from crimson red to a brilliant gold to forest green - representing our provinces and territories, as well as the seasonal beauty of Canada. Personally approved by Her Majesty, this design - which will function as the visual identifier for the celebration of Her Majesty's Jubilee year - was inspired by the 2002 Golden Jubilee emblem. It is a symbolic statement of the enduring relationship between Canada and The Crown, as personified by Her Majesty The Queen, Canada's Head of State.

The medal's obverse depicts a crowned image of the Sovereign, in whose name the medal is bestowed. The reverse marks the sixtieth, or diamond, anniversary of the accession to the Throne of Her Majesty Queen Elizabeth II. The anniversary is expressed by the central diamond shape, by the background composed of a pattern of diamonds, and by the two dates. The Royal Cypher consists of the Royal Crown above the letters EIIR (i.e., Elizabeth II Regina, the latter word meaning Queen in Latin). The maple leaves refer to Canada, while the motto VIVAT REGINA means “Long live The Queen!” More details can be found on the Governor General's website under "Creation of the Diamond Jubilee Medal".

The ribbon uses a new arrangement of the blue, red and white colours found in the 1953 Coronation Medal, the 1977 Silver Jubilee Medal, and the 2002 Golden Jubilee Medal.

The design of the Diamond Jubilee Medal was created by the Canadian Heraldic Authority, as part of the Chancellery of Honours.
Posted by About the RHSC at 4:30 AM 1 comment:

OTTAWA—His Excellency the Right Honourable David Johnston, Governor General of Canada, accompanied by the Right Honourable Stephen Harper, Prime Minister of Canada, will make an announcement regarding Canada’s 2012 celebration of the Diamond Jubilee of Her Majesty Queen Elizabeth II. The announcement will be made at Rideau Hall on Thursday, February 3, 2011, at 2:30 p.m.

As more details become available, it will be added to this blog.
Posted by About the RHSC at 1:50 PM No comments: